OneLogin brings speed and integrity to the modern enterprise with an award-winning single sign-on (SSO) and cloud identity management platform. Their portfolio of solutions secures connections across all users, all devices, and every application, helping enterprises drive new levels of business integrity, operational velocity, and team efficiency across all their cloud and on-premise applications. Companies like Condé Nast, Pinterest and Steelcase turn to OneLogin to manage and secure millions of identities around the globe. 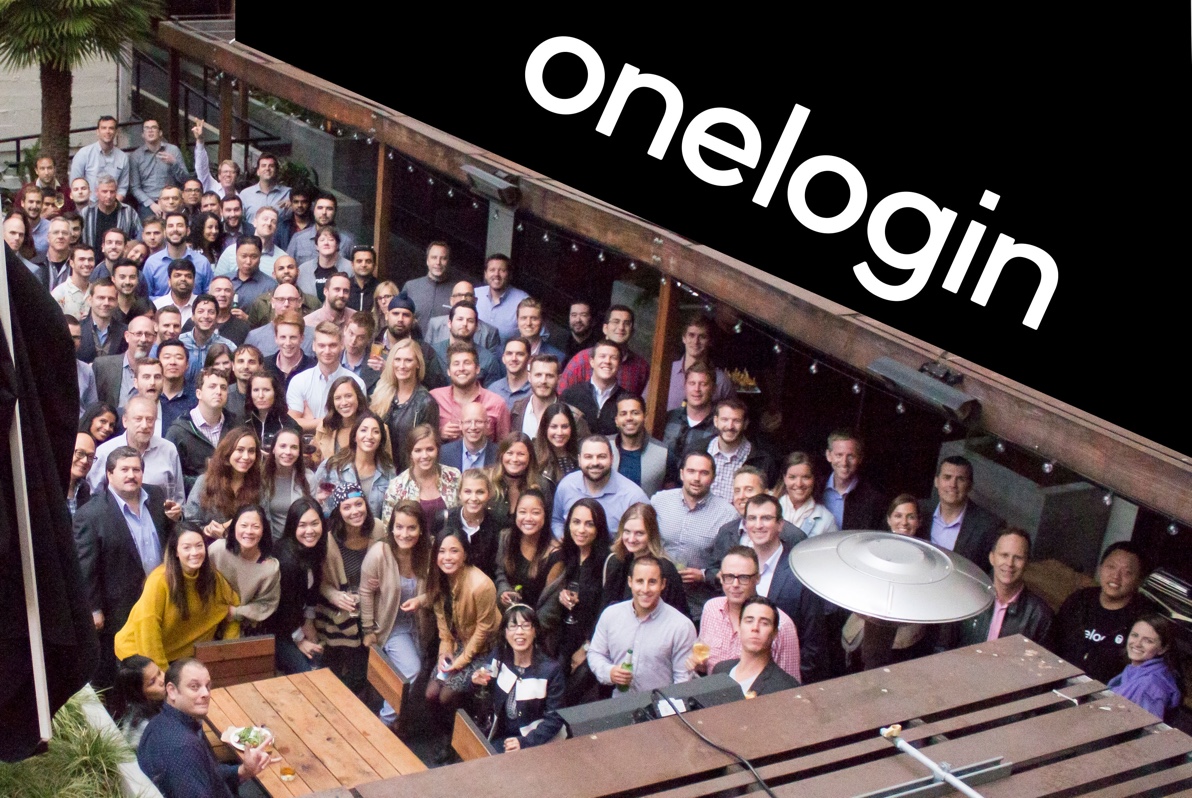 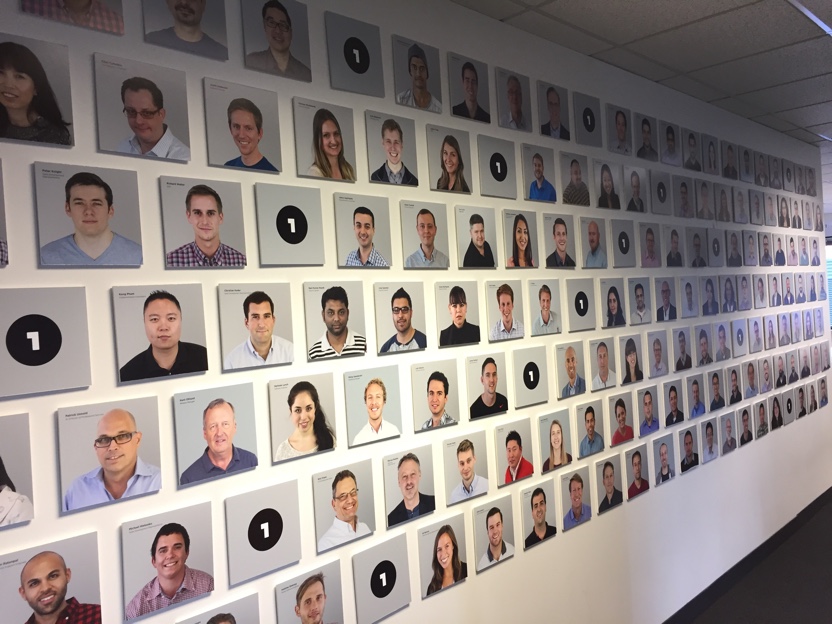 Mai joined the OneLogin team in the summer of 2015 and is a self-described “investor in people.” Building great teams and company cultures is her passion—and judging from her 15 years of experience, she’s good at it, too. Before joining OneLogin, Mai led great teams at companies like PriceWaterhouseCoopers, RichRelevance, and Trulia, where she delivered 100 percent year-over-year headcount growth, while winning 10 workplace awards.

So how did this HR superstar end up in her field? “I fell into HR. My first job was as a research assistant in an investment bank.” She picked up a knack for data and always enjoyed working with people.

Mai’s passion for the field goes even beyond her work at OneLogin. She is a frequent HR conference speaker, and loves sharing her leadership and management experiences with other practitioners in Silicon Valley. 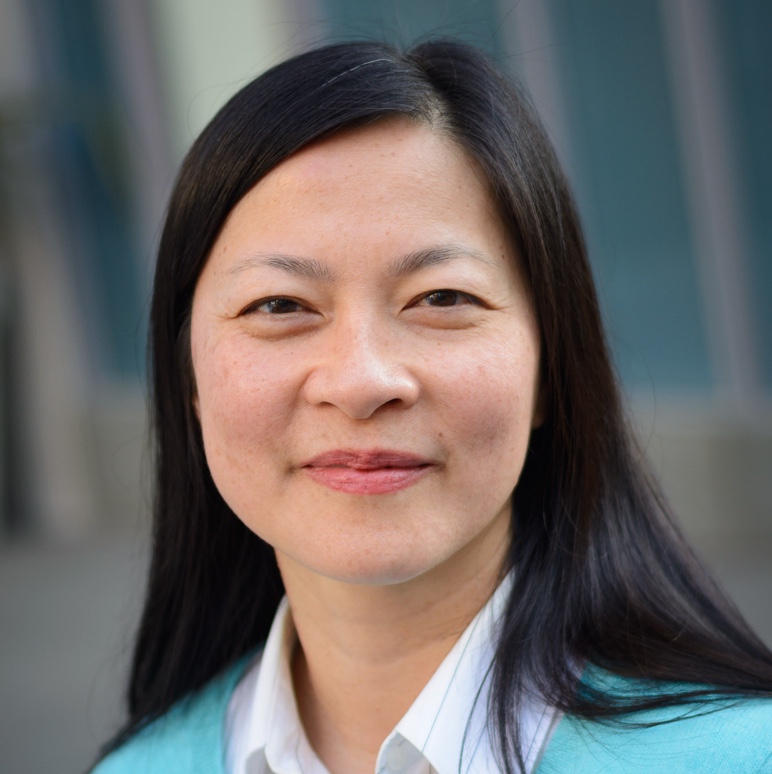 “I never felt like it was our HR system... I just wanted my data!”

When Mai started at OneLogin, the company was using a PEO to manage its HR needs. The company had quickly outgrown the vendor, and Mai found the co-employment relationship stifling. New hires would receive packets welcoming them as TriNet, not OneLogin employees. If she had a question or needed to make a payroll adjustment, she had to figure out who to contact. Though OneLogin had a dedicated rep, they were distant and rarely available for Mai’s team.

And for a metrics enthusiast like Mai, the PEO’s tight control over company data was the last straw. “I never felt that TriNet was really our system. We’d always have to ask them to run custom reports, which took forever…I just wanted my data!”

The company had almost no access to their employee data. They needed a way to report on company metrics on the fly, without having to enlist the help of a support rep at every turn.

OneLogin didn’t have a formal performance process; feedback and comp adjustments were made on an ad-hoc basis. They considered other vendors, but decided that using yet another system on top of their PEO’s wasn’t going to be feasible or user-friendly.

Employees logged into the PEO’s system to check their paystubs, and not much else. The company had no central hub to share company updates with employees, celebrate milestones, or publish company policies.

In searching for a new HR solution, Mai’s team left no stone unturned. Some HR vendors weren’t customizable enough, and some were even too customizable. “Just give me a template. I don’t want to have to create or complete 50 different fields for myself,” Mai explains. She wanted flexibility, but didn’t want to start from square one.

And then it happened. It was what Mai called her “you had me at…” moment. While evaluating Namely, Mai saw a screenshot of its headcount dashboard. It was attractive, intuitive, and most importantly, customizable. On the fly, it visualized data she had previously spent hours trying to capture.

In a word, her team was sold—but she would need to win over OneLogin’s C-Suite leadership. She presented her case and was relieved by their response.

OneLogin’s Founder & CEO knows a good product when he sees one. “Our CEO is an engineer by trade. He cares about design, and he liked Namely because it was easy to use.” While he appreciated the platform’s surface-level simplicity, it was the open API and robust reporting engine that won him over. Fast-forward today, he regularly uses Namely check-in on the company’s headcount and org chart.

Want to see our easy-to-use platform? Schedule a demo today.

Convincing the company’s CFO was going to involve a different set of criteria. While Namely wasn’t the cheapest option Mai’s team was reviewing, she knew the intangible costs of choosing the wrong system. She had seen that firsthand, and after years on TriNet, so had her CFO.

“We can continue to have different systems, but you’re going to burn us out; we’re going to have to put work into making sure that everything remains in-sync, and honestly, that isn’t a good use of time for HR or Finance.”

The message clicked, and Mai had clearance to sign-up for Namely the next day.

The ROI of Using Namely

While gaining independence was a clear benefit of moving from a PEO to a full-service HR platform like Namely, they had a few specific wins that brought extra value to OneLogin and made Mai’s job more fulfilling than ever. 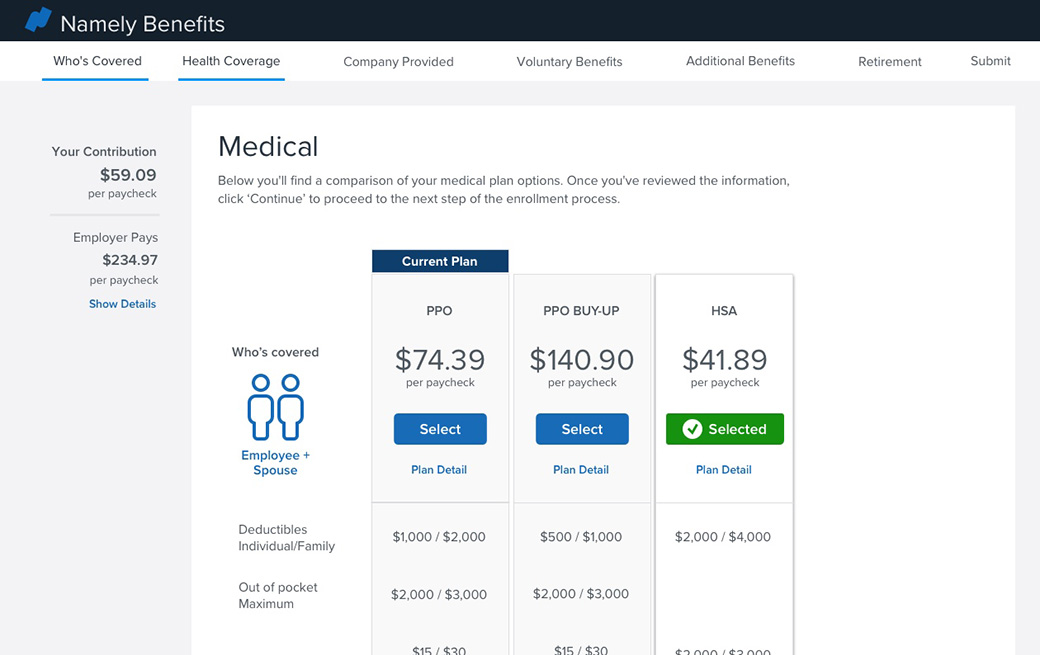 HR has time to focus on strategy, not administrative work.

Mai understands the value of her team’s time. By empowering employees to update their own direct deposit information, benefits elections, and more, she freed up time for her team to tackle more strategic goals. “It all goes back to automation. By teaching employees how to be self-sufficient, my team could focus on the more strategic—and fun—things in HR, like culture. 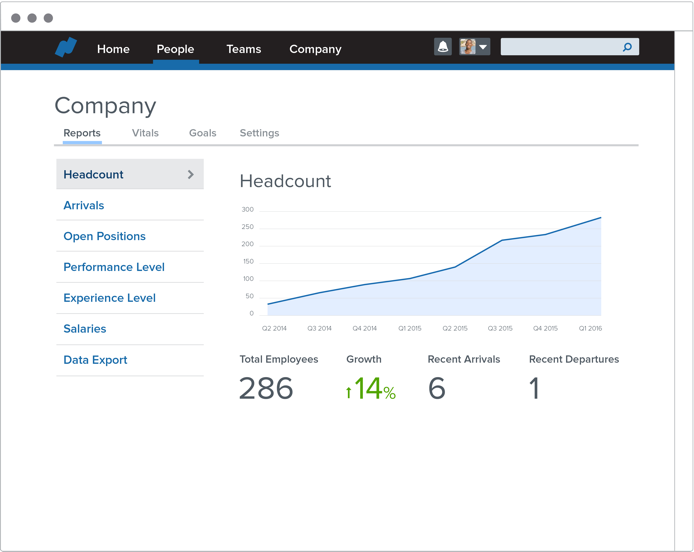 Using the data in Namely, Mai’s team is able to launch quarterly pulse surveys. By cross-referencing the results with company demographics, her team gained a deeper understanding of OneLogin’s culture and level of engagement “We have more time to understand the actual results and develop action plans to address any issues.” 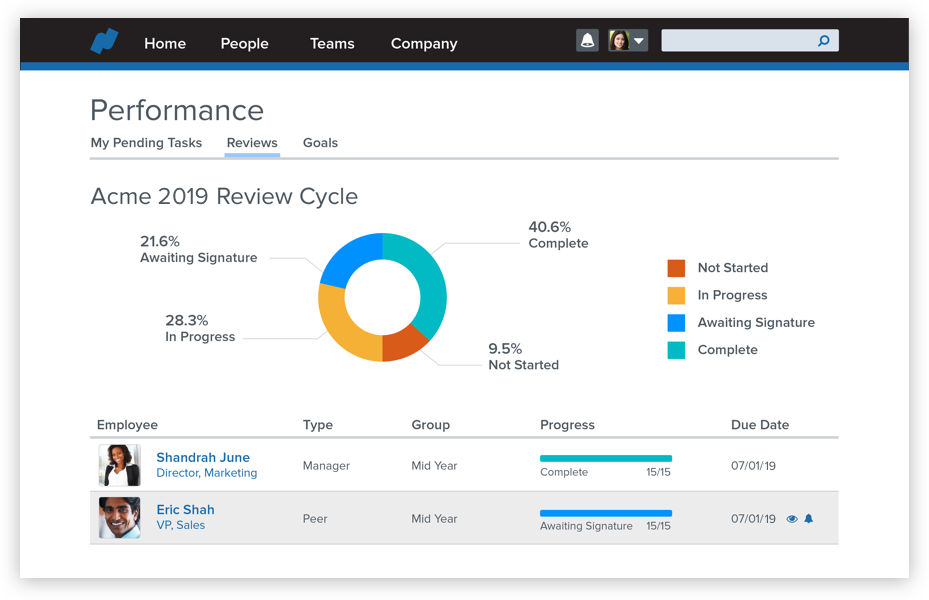 Performance management has been implemented and is tracked.

Prior to implementing Namely, OneLogin hadn’t yet implemented a formalized performance process. Now, OneLogin has an established cadence for self-reviews, 360 reviews and traditional manager-employee reviews. “The system is simple and has increased the level of feedback in our company”

Last year, OneLogin’s leadership unveiled the company’s new core values, one of those being Great Place to Work. And by using Namely, they’ve found a helpful tool in making that a reality. Don’t just take our word for it. In 2016, OneLogin was the recipient of a Glassdoor Employees’ Choice Award, The SF Bay Area Top Workplaces Award, and ranked on Fortune Magazine’s annual list of Great Places to Work. 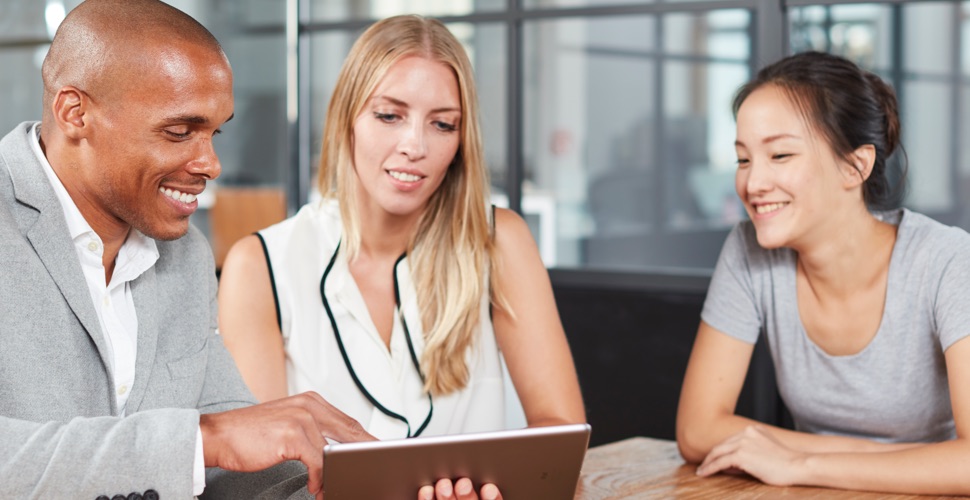 Like any HR professional, Mai loves when her employees are happy and self-sufficient. Her team has been freed up to focus on strategy and engagement, and most importantly, the employees themselves. “Namely lets us spend more time with the actual employees, not just tools.”

For years, OneLogin had relied on a traditional broker to provide employee benefits. After implementing Namely for their HR and payroll, Mai spotted an opportunity to bring her dream of “one unified system” closer to reality. She connected with Namely’s benefits experts and made the switch.

Working with Namely, OneLogin organized a personalized health fair to boost open enrollment participation. The event featured free flu shots, massages, yoga, and was attended by representatives from Cigna and Delta Dental, who took questions live. They even held a financial wellness session.

“The access to these vendors was unreal. Why would one of these behemoth healthcare providers come to us? Namely gave us a direct route.”

OneLogin’s health fair was attended by 80 percent of its US employees, and was even the toast of the company’s holiday party that year.

“We got people thanking us, saying this was the first year they enjoyed the enrollment process and actually understood their health benefits.”

Getting that buy-in from employees was crucial—and for Mai’s team, validating.

“When you’ve worked in HR for a while, you’ve been sold things that don’t exist...Namely was different.”

Mai’s been in the people business for a long time. She’s evaluated and bought HR technology vendors of all sorts and has been disappointed more than once. Product teams can fall behind; with a long history at technology startups, she gets that. But if there’s one thing that bothers Mai, it’s being oversold.

“When you’ve worked in HR for a while, you’ve been sold things that don’t exist.” Mai found Namely’s transparency refreshing. “That level of honesty is tough to find sometimes in the world of fancy demos.”

Picking an HR vendor is a big decision, and not one easily undone. Don’t be afraid to get into the details, and ask feature questions. “Can your system handle three direct deposit fields? What exactly is on the roadmap for this quarter?”

Even after implementing Namely, Mai never stopped asking those questions. She, like the rest of our clients, gets a full view into our product roadmap. If she wants to request a feature, she has a direct line of contact with product leadership. We’re building the future of HR, together.

It’s the type of human relationship you don’t often see between vendor and client. And like Mai, we like it that way.

OneLogin is one of more than 1,400 companies that use Namely to streamline people operations, payroll, benefits, and time & attendance needs.

Ready to see how Namely can partner with HR at your company? Request your demo today.